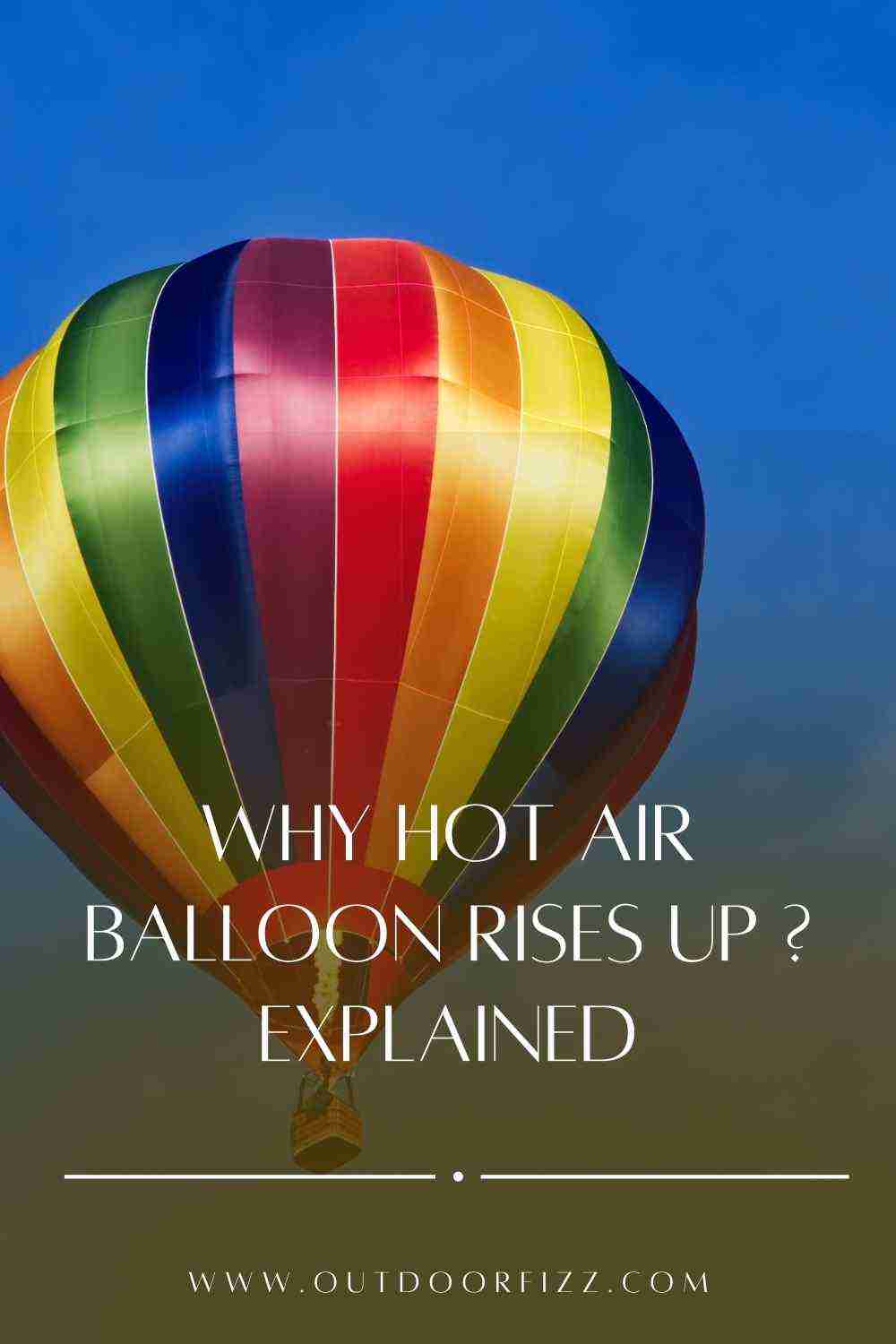 Why hot air balloon rises up ?

The law of buoyancy, also known as Archimedes’ principle, is responsible for the flight of hot air balloons.

Under the influence of Archimedes’ principle, an object submerged in a fluid (gas or liquid) is acted upon by an upward force equal to the amount of fluid displaced by the object, and this force increases as the object moves upward. The balloon floats because hot air is lighter than normal air, which causes it to be buoyant.

A hot-air balloon or a blimp’s buoyancy is the upward force exerted by the air, which helps them to stay aloft.

The air inside a hot air balloon is heated with the help of a burner. Most of the time, liquid propane is used to fuel the burners.

The burner is responsible for mixing the fuel and air and igniting the mixture, which results in a flame directly beneath the bottom opening of the hot air balloon.

This means that the balloons fly because the hot air inside is lighter than the air outside, causing them to float upward.

What is Law of Buoyancy?

At rest in a fluid (gas or liquid), any object that is completely or partially submerged in the fluid experiences an upward, or buoyant, force equal to the body’s own weight. Archimedes’ principle was first discovered by Greek mathematician and inventor Archimedes.

To keep the balloon rising, a method of reheating the air is required. Hot air balloons accomplish this by placing a burner beneath an open balloon envelope.

The burner can be used to re-heat the balloon’s air as it begins to cool.

Propane is stored in the balloon basket’s lightweight cylinders as compressed liquid.

A hose attached to the intake manifold extends down into the cylinder to facilitate the removal of the liquid.

The majority of modern hot air balloons’ envelopes are made of long nylon gores reinforced with sewn-in webbing..

Panels of varying sizes make up the gores, which run the length of the envelope from bottom to top.

Because of its high melting point and combination of light weight and sturdiness, nylon is an excellent choice for use in balloons.

Nylon at the bottom of the envelope is coated with an anti-ignition coating to keep the balloon from starting to burst into flames.

Most hot air balloons have wicker baskets as their passenger cabins. Because of its strength, flexibility, and low weight, wicker is an excellent choice for outdoor furniture.

Passengers in a more rigid basket would take the brunt of the impact force if the balloon were to crash during a landing.

A small amount of energy is absorbed by the wicker material’s elasticity.

When it comes to piloting a hot air balloon, the controls are actually quite simple.

The propane valve is opened by the pilot, who uses a control to raise the balloon.

As you turn this lever, the gas flow increases, resulting in a larger flame. This is similar to the knobs on a gas grill or stove.

Burning a large flame at high altitude can increase the vertical speed of a plane.

Hot air balloons also have a parachute valve located at the top of the envelope that can be opened with a cord attached to the balloon.

Using the cord attached, a small amount of hot air can be ejected from the envelope, lowering the temperature of the cabin air.

The balloon’s ascent is slowed down as a result of this. The balloon will sink if the pilot keeps the valve open for an extended period of time.

HOW DO Hot Air Balloons Rise up AND Come down?

There are burners that can be used to raise the balloon’s altitude by turning them on when it is time to take off. The faster the balloon rises, the lighter the air.

Pilots may either wait for the air to cool naturally or open the parachute valve and let the hot air out of the balloon when they wish to descend.

In order to keep the balloon at a constant height, the pilot must utilise the burner on a frequent basis to guarantee that the envelope is properly balanced between hot and cold air.

When piloting a hot air balloon, the only control the pilot has is the direction and speed of the wind.

Moving the balloon up or down may also be used to swivel it to the left or to the right.

These differences in wind direction are related to their differing heights.

Once they have located the easterly wind, pilots must rise or descend in order to follow the current.

In addition, the basket has a green and black cable that helps to turn it in the right direction.

Then and Now of Buoyant Balloons

Despite the fact that buoyancy was established long before the advent of the hot air balloon, it was not always effectively employed.

Balloons from the Early Ages.

Hot air balloons have been around for a long time in idea.

It is possible that Archemedes, one of the best mathematicians of Ancient Greece, came up with the idea of flying vehicles that were driven by force.

Both English scientist Roger Bacon and German philosopher Albertus Magnus created hypothetical flying devices based on this idea in the 13th century.

It wasn’t until the summer of 1783, when the Montgolfier brothers flew lambs, ducks, and chickens for eight minutes above France, that real flying took off.

The brothers Joseph and Etienne worked for the prominent paper firm owned by their parents.

To pass the time, they began experimenting with paper cups that were raised in the air by hot air. A hot air balloon comparable to the ones in use today was developed over a period of several years.

However, instead of utilising propane, they used straw, dung, and other materials burnt in an attached fire pit to power their device.

It wasn’t until the early 1800s that the hot air balloon was entirely superseded by gas balloons, with other designs and daring flights following.

Pilatre de Rozier’s death during an attempted flight over the English Channel was a major cause to this drop in popularity.

With his hot air balloon, he also built an additional hydrogen balloon for flying. The hydrogen in the balloon caught fire early in the flight, engulfing the balloon in flames.

The Hot Air Balloon of the Modern Era

Over the next century, a number of new discoveries and technologies paved the way for hot air balloons to make a triumphant return.

In the middle of the twentieth century, hot air balloons were once again popular thanks to the development of the liquid propane burner and the relentless work of Ed Yost.

These balloons use liquid propane burners to heat the air within their envelopes. This is what gives modern hot air balloons their buoyancy, as previously indicated.

After more than a century, hot air balloons may finally take to the skies again.

The best way for achieving buoyancy in balloons would have remained gas if not for Ed Yost’s innovation on the liquid propane burner.

More hot air balloons are in use now than ever before.

Sporting activities are another pastime for some people.

Eight minutes was all it took to transport three chickens, two ducks and a sheep across France.

After conducting experiments with hot air and paper containers, they came to this conclusion.

A hot air balloon accident is extremely rare, and the pastime is generally considered safe.

Only 173 people have died globally since 1785, with 61 of those deaths occuring in the United States.

A normal flight time for a commercial hot air balloon is between an hour and two hours. Commercial firms often provide trips from 15 minutes to two hours, with longer trips costing extra.