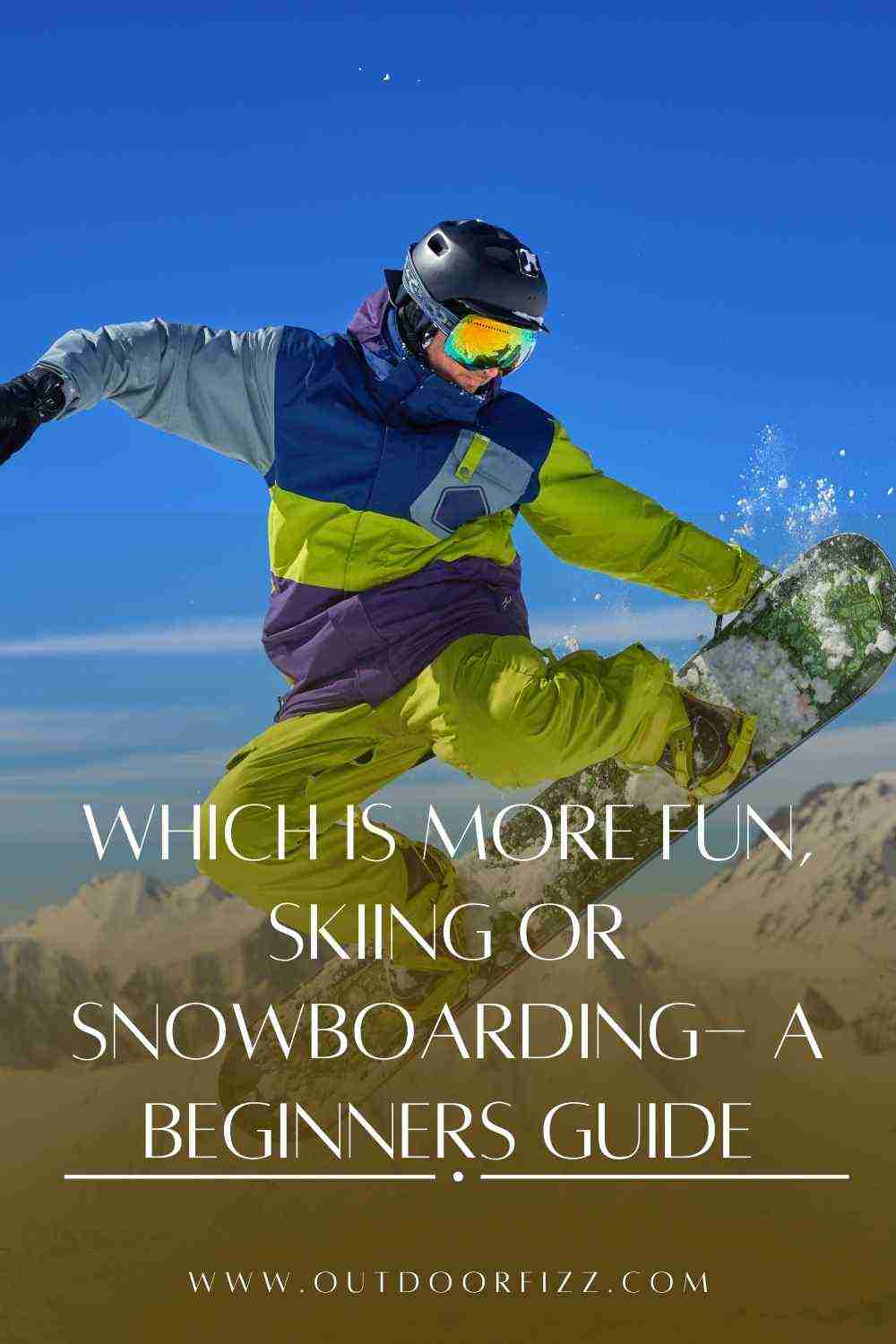 Which among snowboarding or skiing more fun ? – A Beginners Guide

They are both super fun. SnowBoarding is harder to learn even though the learning path can be faster.  But falls hurt more. Wrist guards and helmet strongly recommended. SnowBoards are a bit of a pain on flat access paths.

On the other hand, Skiing is a bit easier to learn but harder to master. Skiing is generally faster than Snowboarding. Easier on flats and you can usually walk out of deep snow or drifts.

As a skier for 4 years and a snowboarder for now 5years,  I feel they are both super fun, but if you’re torn between the two, perhaps this would help you decide…

Skiing and snowboarding are very popular winter sports. Though they are similar games in respect of being played in the snow.

While in snowboarding only a solid, single, wide board is used, two boards are used in skiing.

Skiing involves two skis that are strapped with bindings. The skiers use the skies to navigate and propel themselves through the snow.

But snowboarders, who do not use skies, use their body to navigate and propel.

Skiing is easier to learn initially. You fall doing both but the falls are generally more gentle on skis.

You can more easily stop a fall on skis since you have another leg to rely on catching your balance.

When you are locked into a snowboard there’s no regaining your balance.

A benefit of snowboarding is that you can excel to higher skill levels more quickly than skiing once you’re past the initial learning phase.

Skiers tend to plateau at the intermediate level more so than snowboarders.

Skiers can more easily make their way around the mountain by utilizing poles and skating.

Lastly, it’s less expensive to purchase a snowboard boot and board set up than it is to buy ski boots, skis, and bindings.

Let’s find out some of the major Pros and cons of both Snowboarding and Skiing That would help you decide on which winter sport to choose.

Pros and cons of snowboarding vs skiing

Should I try snowboarding or skiing?

Which is faster to learn?

Snowboarders can suffer from more wrist injuries given the falling factor, and using their hands for support in getting back up after they’ve tipped.

And with both skiing and snowboarding, your core and legs are the parts of your body experiencing the biggest muscle boost.

The gear you need

While the gear recommendations for both sports are similar’ layered clothing, goggles, long gloves, a helmet’ one difference is the boots. ‘With skiing, you wear much harder ski boots rather than the soft boots for snowboarding, which usually are more comfortable,’ says Mark Sergent

On the one hand, experts have stated that Skiing is easier to learn but quite difficult to master. When learning to Ski, the first few days are usually very fun. It is easy to catch on to what the instructor is doing, and you benefit from having two separate skis on two separate legs.

After a few sessions, you will have enough skill to manage a few ski slopes. However, when it comes time to move your legs simultaneously, you may have difficulty.

On the other hand, while snowboarding is harder to learn, you will have an easier time mastering this activity.The first few days of snowboarding will typically include a lot of falling.

However, once this is over you will have no trouble becoming an excellent snowboarder.

Also, with snowboard, there is a lot of protective gear that will allow you to break the fall.

When it comes to comfort there is a huge difference. Snowboard boots are said to be way more comfortable than Ski Boots.

With snowboard boots, you can walk around with ease and comfort. However, walking in Ski Boots can be very difficult and uncomfortable.[1]

All winter activities are super fun and also comes with the inherent risk associated with them.

As for skiing vs snowboarding, I don’t think one is more dangerous than the other.

Due to equipment differences, there are injuries that are somewhat specific to each discipline.

“Snowboarders are between 50% and 70% more likely to get injured, but also significantly less likely to be killed on the slopes than skiers. “ – as TheGuardian reports.

As for my experience, I must say that I was lucky when it comes to both activities, I just had two minor injuries during my backcountry skiing trip.

There are different dangers involved in both Skiing and Snowboarding.

I have noticed. Falling on soft snow is better than falling on icy terrain or rocks or into trees. Your ability to be strong and stay in control is a big determinant in injury avoidance.

Here are some tips that might help you to stay safe and enjoy your favourite winter activity:

• Don’t skip the warm-up can! Just a couple of minutes can help your tendons, ligaments, and muscles relax.

• Shorter skis can lower the leverage on legs which can be additional help with preventing fibia breaks.

• Make sure that the ski binding’s DIN release mechanism is set correct!

• Wear impact shorts that can help you to absorb falls and keep cold chairlifts at bay while snowboarding.

• Invest in a good helmet since it can provide great protection against the “heel edge catch”.

How to tell which you’ll prefer

If you like wakeboarding or surfing in the summertime, snowboarding will likely be a good sport for you.

‘It’s similar movement so you may catch on faster to snowboarding than you would to skiing,’ says Sany O Brian.

If you like skating (either on ice or rollerblading) or cross-country skiing, downhill skiing might be the better fit for you, says Ronnie

‘To you, it might be more natural to stand on two skis because of what sports you enjoy than it is to be in that side position of standing on a board,’ she says.

Snowboarding is more difficult to get started. Beginners need to pay attention to falling injuries at the beginning.

Skiing starts with a lower difficulty. As long as you pay attention to the falling posture, the chance of injury is lower, but the Snowboarding is difficult to control the posture of falling,

They are both fun activities to do in the winter tomes.