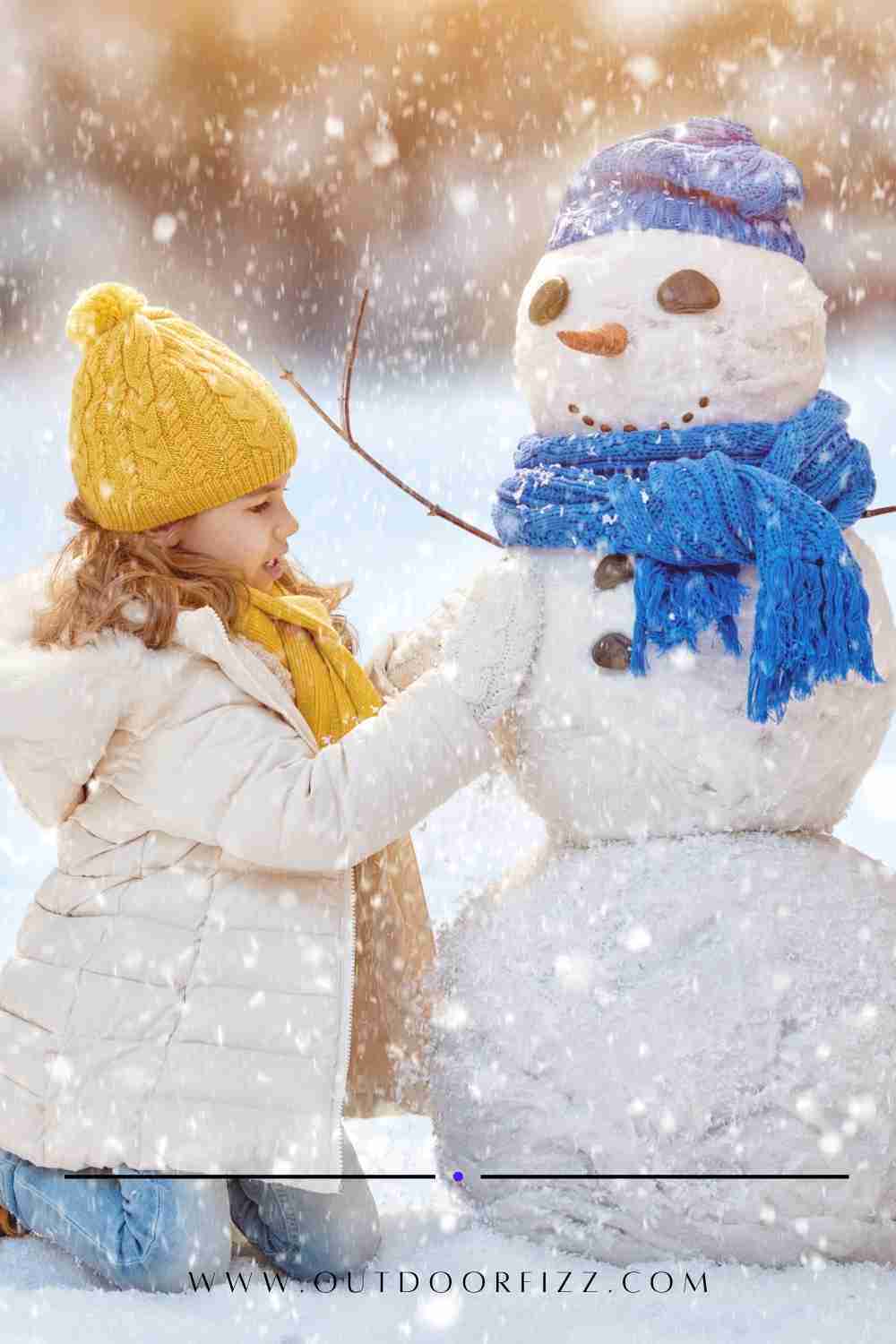 How to stop a snowman from melting

Building a snowman isn’t always light hearted fun, it can be serious and competitive business- especially for parents.

So in the spirit of the recent snowfall we thought we’d offer you a nifty guide to building the ultimate frosty pal.

You worked extremely hard on your snowman, devoting hours to his meticulous sculpting, assembly, and decoration.

You took a lot of pictures, and while a picture is worth a thousand words, you don’t just want a picture.

You want your snowman to last as long as possible before melting. Is there any way to keep your snow friend around for a little longer?

Try the following methods to keep your snowman from melting:

Following that, we’ll go over each of the above Five cold-maintenance methods in greater detail, ensuring that your snowman is the longest-lasting one on the block.

Continue reading because you will not want to miss it!

1.Consider building your snowman in the shade away from the sun.

Certainly, we’re starting with a straightforward example, but it’s still worth noting.

It is critical to consider where you will place your snowman.

You are not need to construct him in the same room in which he will reside, although it is usually a good idea if you are able to do so.

It is difficult and nerve-racking work to move a snowman from one location to another. Because if your snowman isn’t totally stable, he will collapse and perish throughout the trip.

Because the temperature of the air changes during a winter day as a result of cloud cover, sunshine, and wind, your snowman is particularly sensitive to temperature fluctuations.

The sun is the most dangerous enemy of the snowman, therefore building your snowman in the shade will help to extend its life.

Additionally, choose a location that does not receive a lot of direct sunshine, perhaps near a structure for added shade. Regardless of whether or not there is much shade around your home, your snowman will still endure for quite some time!

2.Keep an Ice Bucket or Cooler Near Your Snowman

Snow and ice are quite similar in many ways, including the fact that they both include water as their fundamental constituent. Ice, on the other hand, is simply frozen water, whereas snow is simply air vapour that has accumulated and frozen over.

The fact that ice melts more slowly than snow is another distinction between the two.

Obviously, you’re asking how this is feasible. Please bear with us as we explain. Despite the fact that snow has a bigger surface area than ice, ice has a higher density.

Because of its higher density, ice takes a greater amount of heat fusion in order to melt than snow.

True, because they are both composed of water, snow and ice melt at similar rates and do not necessarily have considerably different melting rates.

Nonetheless, because to the fact that ice lasts longer than water, surrounding your snowman with water may be able to assist extend its life to some extent.

You should keep in mind that ice has a higher thermal conductivity than snow, which means it may generate heat more easily.

Snow’s thermal conductivity allows it to melt just the outer layer of its layers, leaving the inner layers intact. Ice also has a high albedo, which is a measure of how well solar radiation is reflected by a surface material.

What is the significance of all of this? Because it adds an additional layer to melt, the ice can assist in keeping your snowman in place to a certain extent, but it is not your greatest option.

We propose enclosing your snowman with an ice cooler or ice packs in order to keep him cool. Spritzing the snowman with a spray bottle to cause the water to freeze and solidify may actually speed the melting process rather than slow it down altogether.

Are you a handy person? If you’re determined to keep your snowman as long as possible,

you could build him his own ice cellar, also known as an icehouse. Icehouses were created out of a need to keep ice around before people had the convenience of refrigerators, so they are certainly ancient inventions.

They’d then insulate the icehouse with sawdust or straw and store the ice in their ice cellar.

The ice would remain for months, or even the entire rest of the year, keeping them cool as the weather warmed in the spring and summer.

An ice chamber or icehouse can resemble almost anything; here’s a link with photos of icehouses to get you started.

They range from warehouses to homes to structures with beautiful architecture, as you can see.

The only disadvantage of storing your snowman in an ice cellar is that you can no longer display him in the front yard.

You’ll have to pay him a visit in the ice cellar, but you won’t have to worry about him melting.

Building materials such as Pykrete (a frozen alloy consisting mostly of water and wood pulp, such as sawdust) are often utilised in the construction industry (14 percent).

Pykrete is the name given to the resulting material in honour of its inventor, Geoffrey Pyke, who was responsible for its creation. During World War II, Pyke advocated for the deployment of his new technology to build aircraft carriers for the Royal Navy of the United Kingdom, which was eventually implemented.

Homemade pyrkrete is something that can be made in the comfort of your own kitchen. Once it has been made, you will notice that it acts differently from ordinary snow.

It does not melt as quickly as other materials due to the fact that it has a lower thermal conductivity. Snow and ice, which are equally viable options, are both tougher and more lasting than tarpaulin. Pykrete is not always easy to deal with, and even concrete can be tough to work with at times, depending on the situation.

When you’re not using pykrete to construct a snowman, keep it in a cool place so that it can preserve its ice-like consistency between uses. Is it feasible that your ice cellar is the source of the problem? If it’s not a problem for you, you have plenty of room.

How can you make use of pykrete to extend the life of your snowman a little bit further?

As a fallback option, you could always sprinkle some sawdust onto a huge pile of snow in your yard and utilise the snow to wrap up a new snowman for the winter season.

Another approach is to make pykrete reinforcements and place them inside your snowman once he has been completed.

5. Protect your snowman by insulating it!!

You’re confident that you’ve made a clumsy interpretation of the next tip. But hold just a minute, there’s more. What would be the point of insulating your snowman in the first place?

Consider the following: don’t you believe that insulating is just packing something with warmth? Your snowman will almost certainly melt as a result of this.

Heat generated by the body or from another source of heat should be kept from leaving, and this is what insulation does.

The fact that insulation may protect against heat transfers that occur in either way, leaning both warmer and colder, means that insulating your snowman will keep him cool rather than causing him to warm up more rapidly.

Looking back to the earliest icehouses that were erected will provide you with ample evidence of this point.

Even in harsh temperatures, the people who built the ice palaces used sawdust or straw as insulation, and their ice blocks stayed frozen for months at a time, despite the fact that they were built in freezing conditions.

Always keep in mind that you may always conduct a modest experiment for the day in order to see the efficiency of the insulation in action. Make two snowmen of the same size out of the same materials and place them side by side.

Afterwards, put one coat on while leaving the other unattended. Both snowmen should be kept under observation throughout the day and into the next day.

True or false, isn’t it true that the snowman with no coat melted more quickly than the snowman who did? That is without a doubt the case.

How Much Snow Do You Need To Build A Snowman?

HOW TO MAKE YOUR SNOWMAN LAST LONGER?

Our understanding is that we will not be able to keep the snowman that we built permanently (even if we wanted to, don’t you think?).

Giving up your snowman is always difficult, no matter how old you are or how young you are.

Think about what it would be like if you could increase the amount of time you spent with your snowman. Although it is possible, being imaginative and scientific will be required in order to make it a reality in the near future.

Making a snowman that will last longer may be accomplished in a variety of ways, including utilising chloride salt, building an ice chamber for him, and strengthening him with pykrete.

Everyone on the street will be curious as to how you managed to accomplish such a remarkable feat!

If at all possible, create your snowman away from direct sunlight to maximise the life expectancy of your snowman creation.

It is more probable that your snowman will stay longer if he or she is placed in the shade of a tree or a tall building (unless you live somewhere cold and snowy all year).