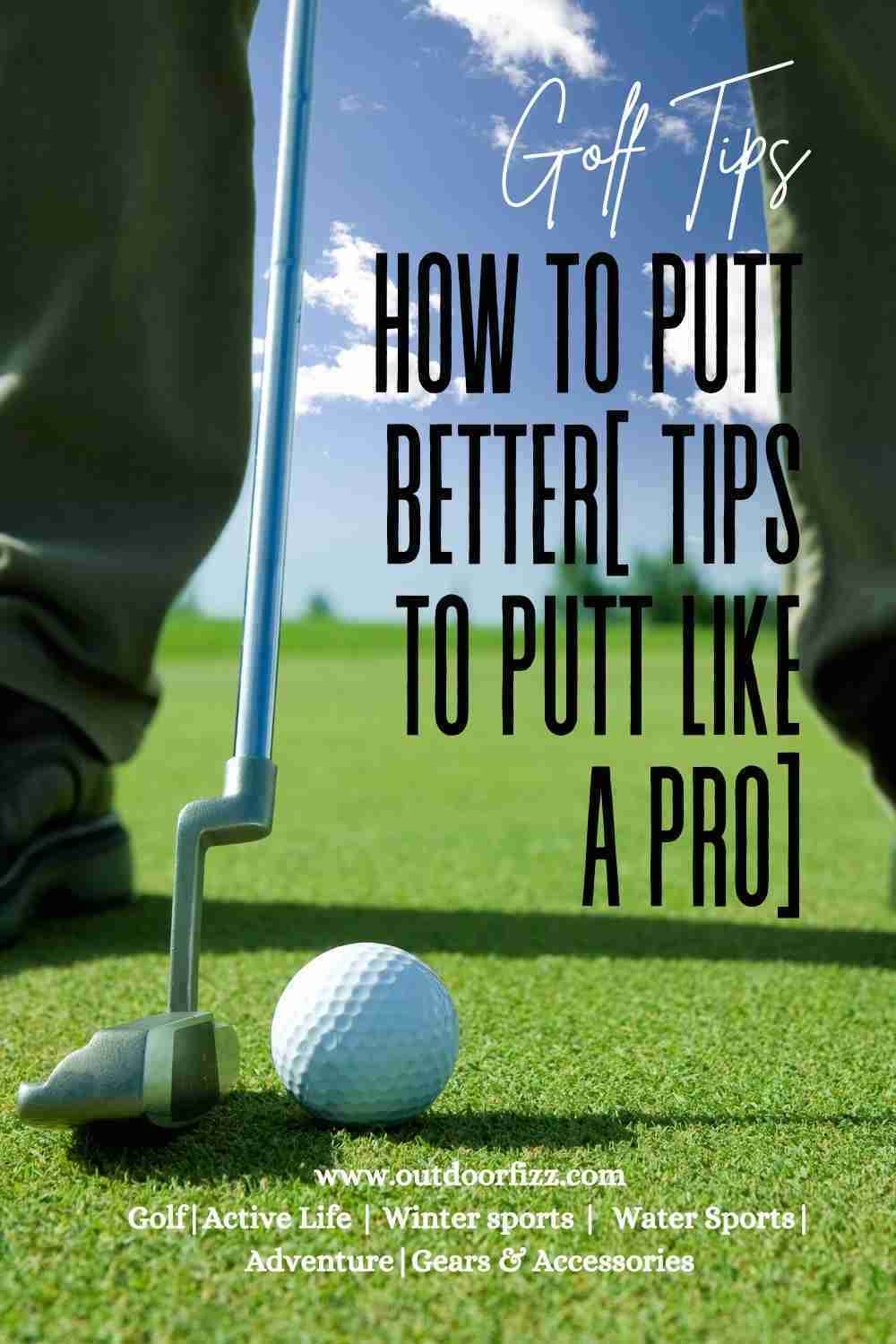 How to Putt better[ Tips to Putt like a pro]

You’ve certainly heard the adage “Drive for show, putt for cash” before. While driving statistics are important to the PGA Tour golfers’ overall success, we all know that a 3 putt can completely ruin a day of golf, resulting to bad decisions and blunders on other holes.

Nothing is more annoying than missing the 6-footer for a birdie. Or making more than 36 putts throughout the course of the 18 holes, destroying a good round of ball striking.

If you want to “putt “like a pro, you’ll love this post because I’ll show you how to do it in detail.

Here I’ll summarise and expand upon the various articles I’ve written on the subject of putting technique and practice. I believe this, together with the materials I’ve linked to, will provide you with everything you need to become a world-class putter.

In principle, perfecting your putting stroke is as easy as figuring out the putt’s intended line of attack, lining up the ball with that line or as near to it as possible, and releasing it with enough speed to get it into the hole.

Many golfers have trouble with any one of these three procedures. I say we pick off their heads one by one.

First, we’ll help you develop a solid putting stroke, and then we’ll examine how to maximise your success on the green.

How to Putt better[ Tips to Putt like a pro]

Most Golfers are familiar with the tee exercise that professional golfers use to improve their ability to make solid putts. This exercise not only accomplishes the same goal, but it also raises your awareness and assists you in concentrating on controlling the path and the distance. Let’s use your recent purchase of a dozen of your favourite golf balls as a tool for instruction, so go ahead and get them ready. You should begin with a straight putt from five or six feet away, which, according to tour standards, is made roughly 70 per cent of the time.

The following are the two most crucial factors of distance control to master if you want to putt like a pro:

Get a wonderful touch.

You may improve your putting skills by engaging in a variety of feel workouts and putting the emphasis on distance management when you actually play the game. The subconscious mind is responsible for the sensation of making a putt. Here are some crucial drills:

•Take anywhere from three to six golf balls and hit them from a range of different distances. •

Practice each stroke a few times before actually playing it so that you can get a feel for how much force should be applied to it. Arrange the remaining three balls so that they face the same direction as the hole and are spaced approximately 30, 25, and 20 feet away from it. Put the stroke through its paces and take your time as you work to make each putt. Repeat this technique a number of times, but try it from a wide variety of putting distances and angles each time. You should also practise putting on flat ground, uphill, and downhill.

What does Pro Golfers do…

In either case, the result is inconsistent control over the distance. You should also pay attention to maintaining a consistent tempo travelling back and through the hole. This pace can be either short and quick, as in the style of Brett Snedeker, or long and smooth, as in the style of Ben Crenshaw and Phil Mickelson.

The putter head will travel a little farther than you take it back owing to momentum, and the actual speed through will be twice as fast as the speed going back when you are doing this practice.

In other words, the putter head is travelling at a speed that is twice as fast as it is going back.

Create a reliable and regular putting regimen for yourself.

To get started, you need collect information about the next putt you are going to make. Before it is your turn, you should take a trip around the course and get close to the line that connects your ball to the hole in order to acquire a sense of the slope.

Maintain complete and utter stillness during the entirety of the stroke, and do not glance up until after you have made contact with the ball. Maintain this position while the ball is in motion in the other direction.

Are you interested in finding out how much it costs to send golf clubs? Then, in order to acquire an estimate of the price of shipping, please fill out our form that is located on our homepage.

Practice is the best way to perfect your putting stroke.

After you have perfected your technique, the next step is to utilise practice structures that provide you with high levels of feedback so that you can really hone your ability to begin each putt online.

The start direction is primarily determined by two factors: 1) the angle of the club face, and 2) the route that the swing takes at impact. Finding out which of these factors is responsible for your putting mistakes is the most difficult part of improving your putting.

The key is to practise in such a way that you are able to exert control over one of these aspects, specifically your swing path.

The putting drill that follows is quite straightforward and will help you maintain a putter path that is, for the most part, consistent. If your putts don’t start online when you use this setup, the issue will be the putter’s face angle at the point of impact.

Here are 5 Tips to Help you putt better

From a distance of three feet away, putt six balls around the edge of the hole. As a result, there will be six golf balls surrounding the hole in the form of a circle created by the golf balls. See how many of the six putts you can make. You shouldn’t put an end to this practise until you are able to.

The putting drill is known as 1 2 3 Before beginning a round of golf, place three, six, and nine-foot markers on a straight line with golf balls in between them. Perform these in order, starting from a variety of positions around the practice green. You will gain some self-assurance and a better feel for each of these different putt distances as a result of doing this.

The drill for putting the gate. Put in place two tees that are slightly larger in circumference than the width of your putter. Get in position three to four feet away from the hole, and work on putting the ball in while manoeuvring your putter through the makeshift gate in front of you. This will assist you in visualising the correct stroke and provide you with feedback if you happen to nick one of the tees.

Putt 10 balls from a distance of at least 30 feet away and see how close you can get to the hole without missing any of them.

Determine a method by which the appearance of the hole with a diameter of three feet can be marked using tees.

When you are on the course the next time and you are putting from 30 feet or more, visualise the 3-foot hole that you are trying to putt into. This will help you improve your putting. Once you’ve gotten the hang of this drill and are proficient at it, this will relieve some of the pressure and leave you with an easy shot on goal.

What are some of my favourite putters to use?

The  Cobra KING 3d Putter  is one of my favourite putters because it makes it so simple to follow your line and ensure that you hit the starting line every time. In addition to that, the weighting is excellent, making it simple to let the ball flow through it.

And Finally… Putting, although not fun to practise or fun to brag about, will help you win those fun bets with your friends and play better golf, resulting in lower scores and a greater amount of enjoyment from the game.

Spend more time practising with the drills listed above, and make sure to keep the five essential pointers for improving your putting in mind. Mindset and expectations, speed control, start line control, making use of your markings, and practising are all important aspects of the race.

You should strive to increase both the speed and the distance of your swing. You Have Two Choices…

Golf Psychology: Three Tips to Improve Your Putting When You’re Feeling the Pressure

Make an effort to detach yourself emotionally from the circumstance. What exactly do you see before you right now?

A little round ball with a diameter of at least 42.7 millimetres, which has a number of dimples on it, as well as a logo and a mark to identify your ball.

The ball could be brand new and gleaming, or it could be completely worn down! There are thousands of grass blades standing between you and the hole, which has a diameter of 10.8 centimetres and a depth of at least 10.16 centimetres at its deepest point.

You should approach it as though it were a putt of five feet or less.

The same putt from five feet away that you had to make on the practice green. Or on the first or ninth hole, respectively. The putt is only five feet long; game over!

Give some thought to the nature of your work.

When I pose this question, the vast majority of my customers and golfers, in general, will respond very fast – it is, of course, to hole the putt – while giving me a funny look as if I’m stupid! On the other hand, I have to respectfully disagree, and here is why.

Consider for a moment those golfers who compete on the PGA tour and are regarded as the finest in the world.

As I sit here and write this essay, the tour average for the percentage of putts made from five feet is 81.14%.

Therefore, approximately one putt out of every five is missed on the trip. Despite this, I would wager that 99 per cent of these guys in practice are capable of making over a hundred five-footers in a row. It just doesn’t make sense, does it?

Imagine the outcome that you would like to see.

Golf is sometimes referred to be the “ultimate mental game” because players typically spend more than three hours thinking about their next stroke and just about an hour actually playing the game.

In contrast, whether you play football, rugby, or tennis, you are generally required to respond to what is happening around you and the scenario of the game.

When it comes to these sports, all you really need to do is put your faith in the preparation and practice you’ve put in and let your subconscious mind take over.