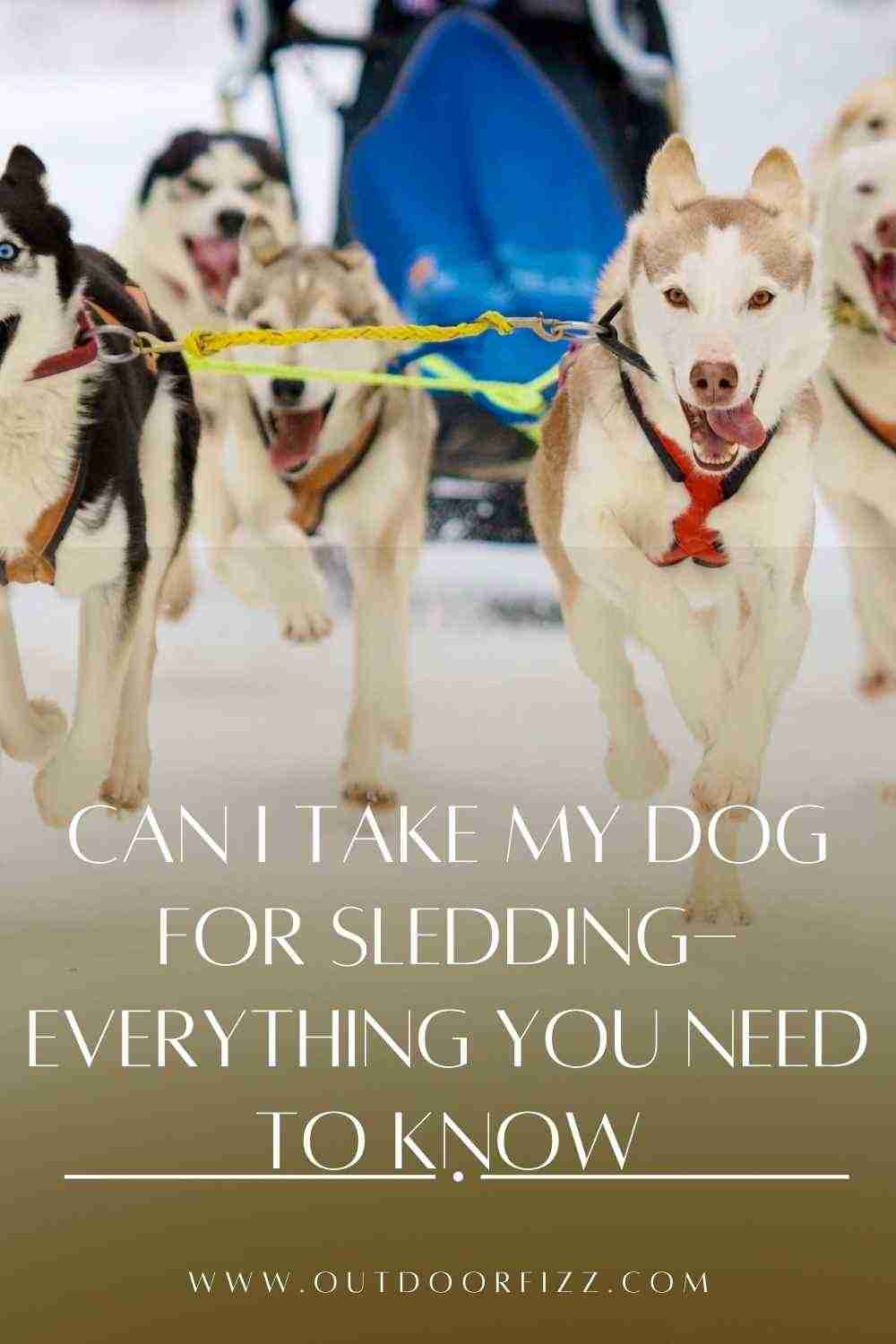 Can I take my dog for sledding

Yes! You can take your Dog for Sledding.Recreational sledding is a fun way for your dog to burn off energy. Continue reading to learn how to train your dog to pull a sled.

Dogs are adored by almost everyone. It’s for a good reason that they are said to as a man’s (and woman’s) best friend.

Do you have a soft spot for dogs and You live in a Plce wher it Snows? The sport of dog sledding, which is popular in the northern hemisphere, might be of interest to you.

In spite of the fact that the Iditarod Sled Dog Race has become synonymous with dog sledding, the first documented use of dogs for transportation dates back to 1000 A.D.,

when the Inuit People constructed the first dog sleds for use as a mode of transportation.

As soon as European colonists made their way to the far northern parts of the planet, they quickly realised the value of this ingenious means of transportation.

Because of its lengthy and illustrious history, it goes without saying that dog sledding has a colourful and exciting past, with lots of interesting twists and turns along the way.

Here are some interesting facts about dog sledding that are sure to intrigue and inspire dog lovers everywhere.

What Kind of Dogs Can sledge

Dogs of diverse kinds from all over the world are bred expressly for sledding, and they come from a variety of backgrounds.

In the case of Alaskan Huskies, for example, they are a cross between the Siberian Husky and the Alaskan Malamute.

They range in weight from 18-34kg. Alaskan Malamutes are bigger and more powerful than other breeds, weighing up to 54 kg.

Another type of sled dog is the Canadian Eskimo dog, which is mostly employed for pulling in the Arctic Canadian regions.

The Chinook sled dog is a rare breed of sled dog that is known for its endurance.

Then there are the Greenland dogs, which are slow but capable of pulling a heavy load over great distances.

Last but not least, Siberian Huskies are frequently employed to pull sleds.

They are smaller in stature than a malamute, but they are stronger.

Samoyeds are also infrequently utilised, but have historically been admired for their beauty rather than their ability to hunt. Some sled dogs are capable of covering vast distances, ranging from 8 to 130 kilometres or more, in a single day!

The Alaskan husky is the most popular sledding breed by far. As explained in National Geographic magazine, Alaskan huskies are mixed-breed dogs with a “hodge-podge heritage that’s custom-made for the rigours of racing and hauling.”

A few other hardies, cold-weather breeds are traditionally sled dogs:

Professional dog sledding is divisive in the animal welfare community.

Sled dogs competing in races are housed in large kennels, sometimes chained to posts at night, and pushed to their physical and mental limits.

Training your dog to pull a sled as a hobby, on the other hand, is quite different!]

Dog sledding for fun is just as safe as any other dog sport. The important thing is to let your dog take the lead and to celebrate and encourage her athleticism in a safe and positive environment.

If she doesn’t like sledding, don’t make her do it, and don’t push her too hard.

However, if your haul-happy hound enjoys sledding, it’s a great way to bond with her and develop her skills.

What Dog Sledding Equipment to use

What do you need for a sled? That depends on the size of your dog team, the driver and the situation. The various aspects to consider are:

Do you require a Break?
Here’s a general rule of thumb: if the driver can control the dog or dogs on a leash even on a snowy surface, you can use a sled without stopping.

Consider the driver’s age, weight, and strength, as well as whether there will be any hazards along the trail, such as a roadway to cross or other animals your dogs may chase.

If the dogs can move the driver against his or her will, a sled with a brake is required.

The X-Back harness, in particular, is fairly standard for dog sledding.

Snow hooks are used to temporarily hold the sled at the start or along the trail, allowing the driver to attach a dog to the Gangline, rearrange dogs on the team, or untangle a dog.

Snow hooks can also be used as a brake to slow down larger dog teams.

How to Train Your Dog to Pull a sled

Begin by having your dog “tow” an inanimate object, such as a small tyre or piece of wood.

Attach the object to your dog’s harness with a tow line or cord, leash her, and walk/run alongside her while encouraging her to pull (source).

Your Pooch may be surprised at first, but keep showing your dog how much fun it is to tow! Give the dog lots of compliments and treats.

Gradually increase the weight or pressure on your dog as she becomes accustomed to pulling an object behind her (this can take a day or several weeks, depending on the dog).

You’ll also need to decide which command you’ll use to tell your dog to move forwards!

Keep your Training straightforward and simple

When the lead dogs correctly execute a command, we proceed down the trail.

We come to a halt if the lead dogs do not understand the command.

In this case, we do not use the “Whoa( Stop) command.

Because if sled dogs enjoy what they do, allowing them to do it is positive reinforcement in addition to our praise.

When they are forced to stop running due to an error, this is a punishment.

We don’t need to use food to train dogs; simply allowing them to do the work for which they were bred is sufficient.

In training, your job is simply to harness the desire to run and channel that desire as our most effective training tool.

Every dog on the team must know a few commands in order for the team to function as a whole.

These are simple commands that refer to the stopping and starting of the dog team.

In general, when the dogs mature out of puppyhood and begin running with the team, they learn this during their first few runs.

When our young dogs start running for the first time, they are tethered to some of our older dogs who can teach them the ropes.

They also assist them in learning these fundamental commands. Every sled dog should know the commands “Ready,” “Alright,” and “Whoa.(Stop)”

Why Do dog sledders say mush?

Although dog team drivers are often referred to as “mushers”, and “mush” is thought by many to be the standard word to get dogs moving, the word is, in fact, not often used as it is too soft for a distinctive command.

The term is most likely derived from the early French explorers’ use of the word “marche” (go, run) as a command to a team to begin pulling.

The most common commands for a dog team are a List of Sled Commands.